Postman Pete Petite was waiting for the bus that delivers the mail every day. It was early on a Thursday morning, and he was exhausted. He and Margaret spend the previous evening at the camp of the Chestnut family, and though he has heard that Grover and Pansy are great entertainers he sort of misinterpreted it. They got home late (or was it early) and now he can't keep his eyes open. Instead of reading, like he always do, he decided to close his eyes just for a second ... 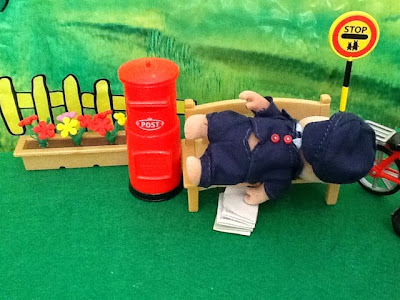 Pete was woken by a loud honk. He jumped up and realised that he actually dosed of for a few seconds ... or was it longer. 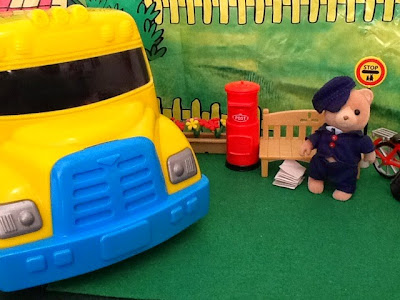 He gathered the mailbag and went to meet Kelly Bassett who is the regional postman and responsible for the safe delivery of mail to the smaller villages. Pete liked Kelly, he was a jovial chap and always ready for a joke or a prank.
Kelly (smiling): Morning Pete, what's up?
Pete (still trying to compose himself): Hiya Kelly, nothing much. Just had a late night.
Kelly (chuckling): You must have seen your face when I woke you. I had everyone in stitches?
Pete: Everyone?
Kelly: Yes, this morning we have a full bus of passengers, 19 I think. And they are all getting off at SV.
Pete: Really?
Kelly (laughing): And now they all know who you are. 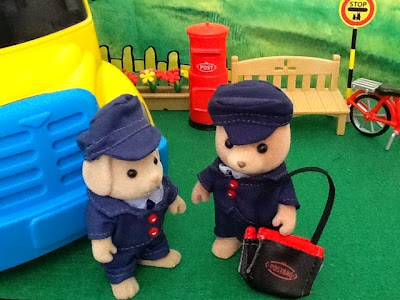 Pete walked around the bus and was astonished to indeed find a crowd gathered at the other side of the bus. Sugarbush Valley is truly expanding fast, was his immediate thoughts, when he realised that the Timbertop family, who were returning from their vacation, was amongst the crowd. He also spotted Alonzo Macavity and his family, who although new residents, are so familiar in the village that they surely doesn't count as strangers. 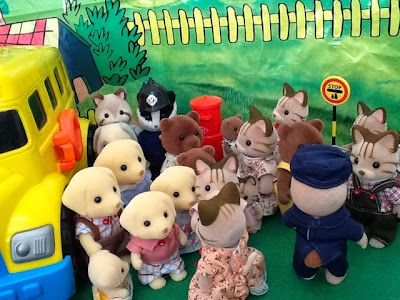 He turned back to Kelly, who was ready to leave, to say goodbye.
Pete: See you tomorrow Kel! And please be kinder next time.
Kelly. Not a chance! See ya! 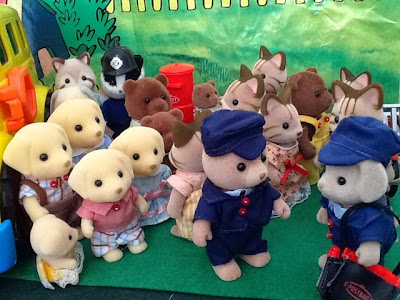 And just like that Pete was done with his morning chores and ready to go home to a hearty breakfast and hopefully a quick nap before he has to open the Post Office at 8:00. When he turned around, to say goodbye to Alonzo and Taylor, everyone were staring at him expectantly. Obviously the newcomers were thinking that he was here to escort them into the village. Pete wanted to cry. 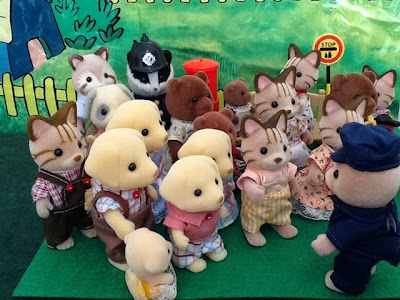 He quickly made peace with the fact that he will just have to help these people. Obviously they have no clue where to go too and it is part of his duty as a resident of this village to help them. He was relieved to see that the Timbertops were leaving and that the Macavities followed short on their heels, at least their was a few less to worry about. 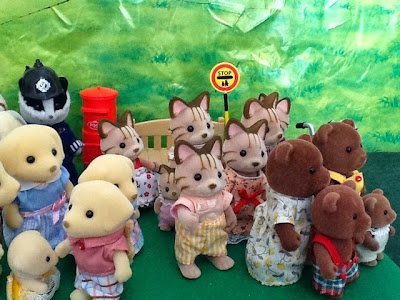 He decided to firstly go and introduce himself formally. He went over to a stern looking badger, dressed in a police outfit.
Pete: Good morning sir, I am Postman Pete Petite. Welcome to Sugarbush Valley.
Bobby: Good morning to you too. I am PC Bobby Roberts. I am the newly appointed police constable and have an appointment with Mayor Hugo Trunk. Do you know where he lives.
Once again Pete was surprsed. A "Police Constable" why on earth would SV need one of those, but Mayor Hugo probably has his reasons. 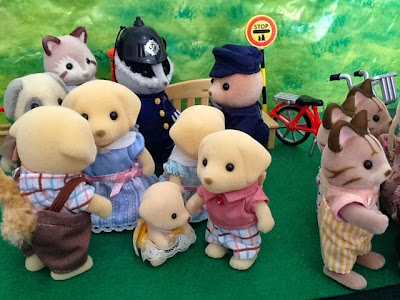 Pete: Nice to meet you PC Roberts. I will show you where he lives.
Edward: Hi Pete, I am Edward Mulberry, older brother of Elmar Mulberry. If you can just point me to their cabin please.
Pete: Edward! Good to meet you. We pass the turn off on our way into the village, so you can just follow us.
Edward. Thanks Pete. 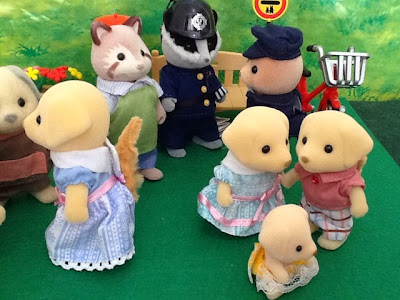 Pete then walked over to the two dogs. He was glad they they already acquainted themselves with each other. He was almost certain that one of them was Antonio Patches, the husband of Dorothy Patches. Everyone in the village knew their story, but he didn't want to jump to conclusions.
Pete: Hello, I'm Pete Petite, Postman of the village, and I'm here to assist you.
Innes: Innes Bercher, new resident of the village. If you can just point us in the direction of Mayor Trunk's house.
Pete: Sure thing, glad to meet you and welcome to our Village! You will enjoy living here.
Antonio: Hi Pete, I'm Antonio Patches, and I just want to find out where the residence of the Henry-Lloyd family is.
Pete: No problem. I will direct you. Are you Dorothy's husband?
Antonio: That is me, yes.
Pete: Great to meet you. 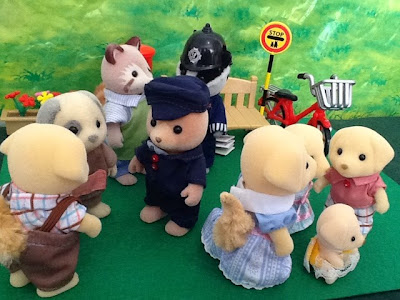 Pete gathered everyone and they made their way into town. Little Karissa insisted riding on the back of Pete's bike. 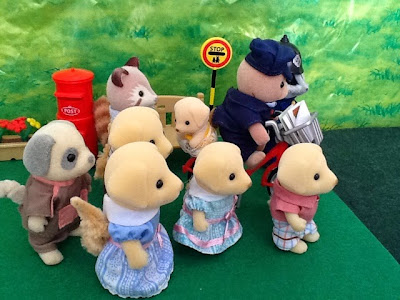 They quickly reached Beechwood Hall and Pete was glad to finally be relieved of this duty. He said goodbye to PC Roberts and the Berchers, with promises of having a visit together soon. 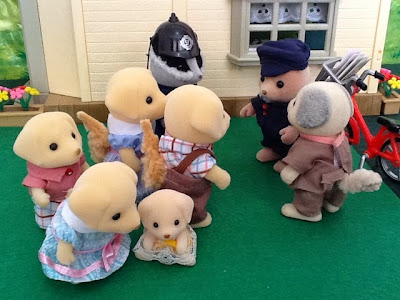 Now only to point Antonio in the right direction. He turned to Antonio and noticed for the first time the toy that Antonio was carrying. Antonio saw this and quickly explained.
Antonio: I know it is huge and probably too much. It is for my baby, Kyle. You know I have last seen him when he was 3-months old. He is almost one year old now. I'm not even sure what he likes.
Pete: I'm sure he will love it.
Pete quickly gave Antonio the easy directions to Cedar Terrace 1 and wished Antonio good luck. Pete had a quick look around and quietly slipped away. He was still counting on that quick nap. 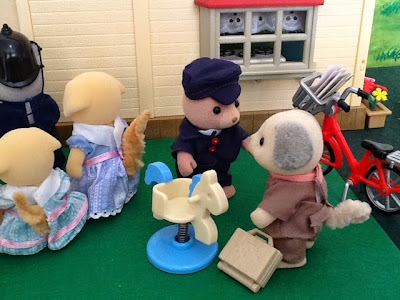 Antonio gathered his things and made his way to Cedar Terrace 1. He was feeling extremely nervous and didn't even notice all the attention he got as he walked along Village street.
Best friends, Mae Mulberry and Roxy Renard was both on their way to work. Mae to open the laundromat and Roxy's first cleaning job for the morning was at Beechwood Hall.
Roxy (whispering): Mae, isn't that Antonio Patches?
Mae: Sure looks like him, but I cannot be sure. I have only seen him in photographs.
Roxy: Well, I guess we will find out soon enough.
Mae: Guess so! See you later Rox!
Roxy: Bye. 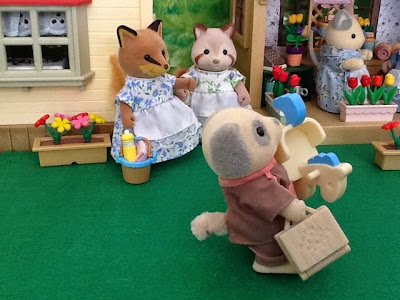 As he passed the Florist, Katrina Whiskers and Arvey Maces also spotted the familiar but strange face.
Arvey: Who is that? Another new resident?
Katrina: I'm not keeping up, anymore. Our little village is booming.
Arvey: It sure looks like Antonio Patches though?
Katrina: Antonio Patches? Oh you mean Dorothy's long lost husband?
Arvey: Yes, that's the one. 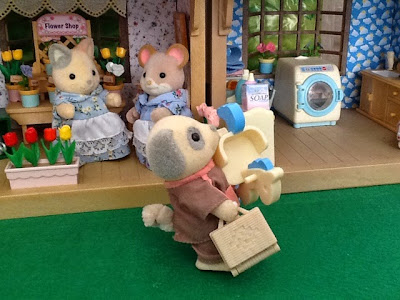 Antonio found Cedar Terrace 1 easily. It was a great looking house, but when he reached the door he hesitated. What will be waiting for him on the other side of the door? It would be easy to just disappear again. Dorothy never replied to the last letter he send her. He wasn't even sure if he still had a wife and what if she doesn't want to see him? 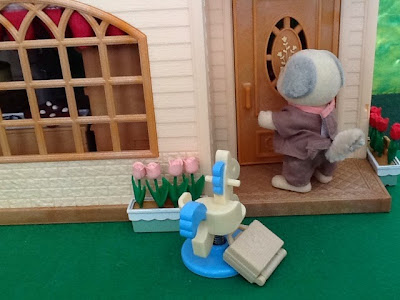 Antonio shifted all this silly thoughts to the back of his head and knocked. As luck would have it Dorothy opened the front door herself, and the look on her face was indescribable.
Dorothy (shocked): Antonio?
Antonio looked her straight in the eyes and said her name with all the passion and love he could muster. Then something passed between them that words can't express and in that moment Antonio knew that he is home and that everything will be alright, maybe not today, but eventually it will be. 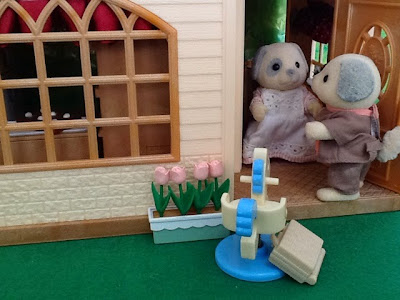 Posted by Eaton Blackberry at 00:50